Six months ago, on February 24, Russian President Vladimir Putin announced a “special military operation” in Ukraine after months of simmering tensions between the two countries. As Putin declared war, tens of thousands of troops were ready to invade Ukraine from land, air and sea, targeting military facilities. But as civilians turned into soldiers to protect their motherland, residential buildings, iconic monuments, government buildings and even hospitals were being bombed by Russian forces.

Many had predicted that Russia would capture Ukraine in the blink of an eye, but Ukraine’s stronger-than-expected resistance gave Russian forces a tough fight with the war raging on for six months now.

Even though Ukraine, which is also observing its Independence Day today, hasn’t lost the war, it has lost a lot to this war – thousands of people have been killed and hundreds of buildings have been destroyed with no endgame in sight. The face of Ukraine — once a beautiful country — has changed, with most cities reduced to rubble.

In the last six months, grim and gory pictures from the war-hit country have shaken the world. There are photos of bloodshed, photos of injured civilians fleeing the country, and desperate scenes showing medics carrying a mortally wounded pregnant woman on a stretcher through the ruins of a bomb-ravaged hospital in Mariupol. Amid all the destruction, devastation and displacement, there are also moments of bold energy, such as a rifle-carrying woman waving a Ukrainian flag in the intensely blue sky as a Kyiv monastery’s tower rises in the background. Take a look. Ukrainian servicemen sit in a bus after they were evacuated from the besieged Mariupol’s Azovstal steel plant, near a remand prison in Olyonivka, in territory under the government of the Donetsk People’s Republic, eastern Ukraine, Tuesday, May 17, 2022. (AP Photo) A resident looks for belongings in the ruins of an apartment building destroyed during fighting between Ukrainian and Russian forces in Borodyanka, Ukraine, Tuesday, April 5, 2022. (AP Photo) Nelia Fedorova, left, is embraced by her daughter, Yelyzaveta Gavenko, 11, the day after they were wounded in a rocket attack which also killed Fedorova’s husband, Oleksii, in Kramatorsk, Donetsk region, eastern Ukraine, Saturday, Aug. 13, 2022. The family had previously evacuated to central Ukraine but returned to their home at the end of June after Nelia and Oleksii had trouble finding work. The strike killed three people and wounded 13 others, according to the mayor. The attack came less than a day after 11 other rockets were fired at the city as Russia’s invasion continues. (AP Photo) 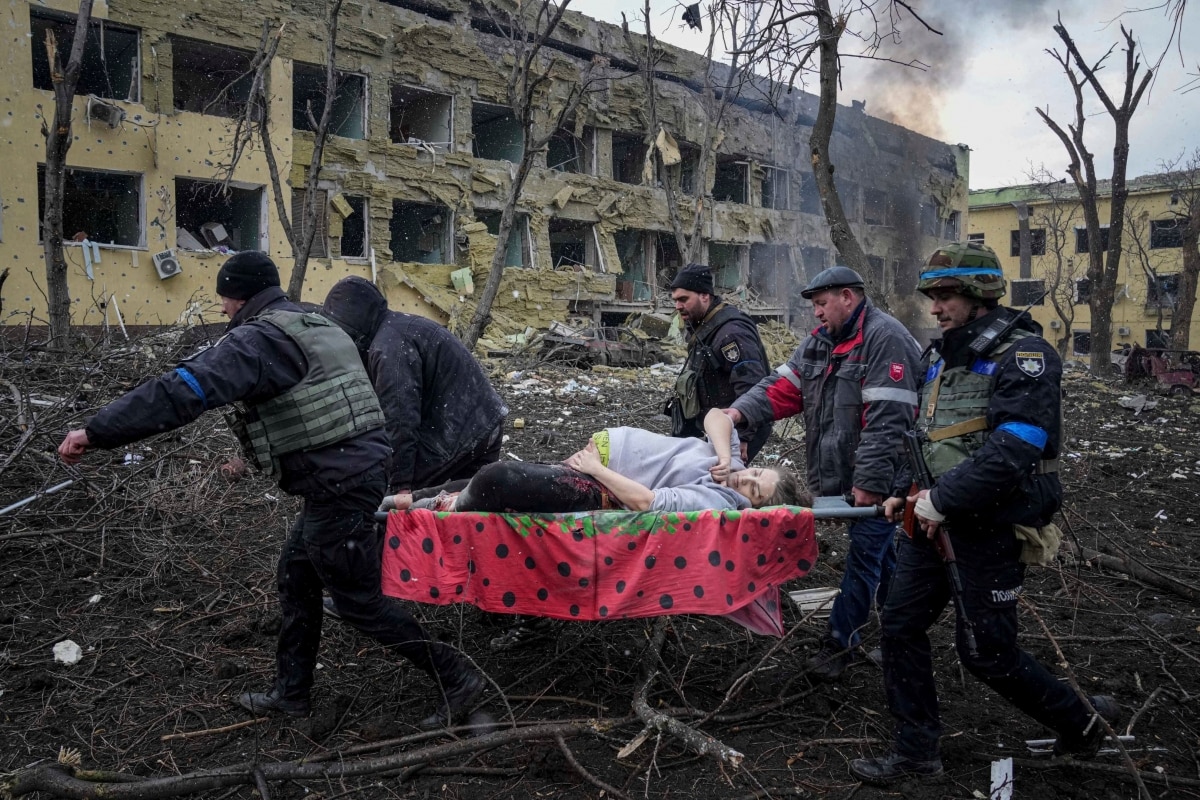 Relatives and friends attend the funeral ceremony for Liza, 4-year-old girl killed by Russian attack, in Vinnytsia, Ukraine, Sunday, July 17, 2022. Wearing a blue denim jacket with flowers, Liza was among 23 people killed, including two boys aged 7 and 8, in Thursday’s missile strike in Vinnytsia. Her mother, Iryna Dmytrieva, was among the scores injured. (AP Photo) Ukrainians crowd under a destroyed bridge as they try to flee crossing the Irpin river in the outskirts of Kyiv, Ukraine, Saturday, March 5, 2022. (AP Photo) 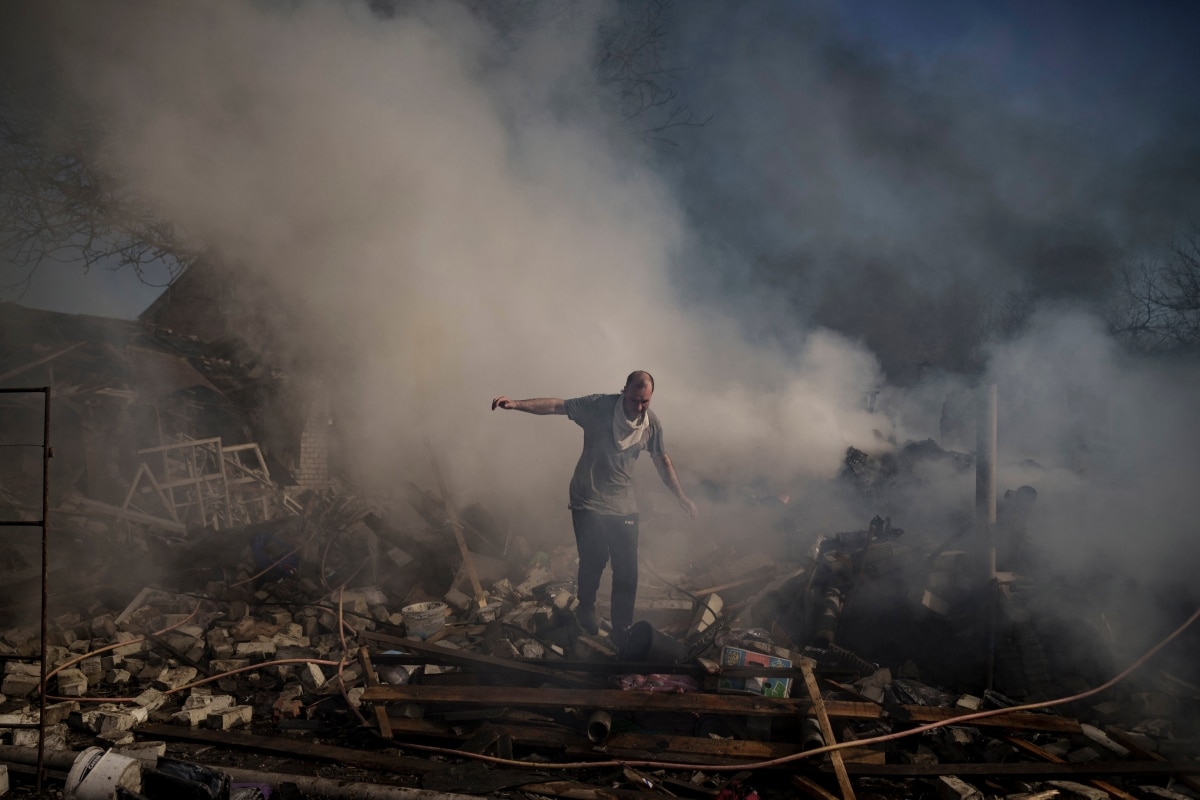 A neighbour walks on the debris of a burning house, destroyed after a Russian attack in Kharkiv, Ukraine, Thursday, March 24, 2022. (AP Photo) 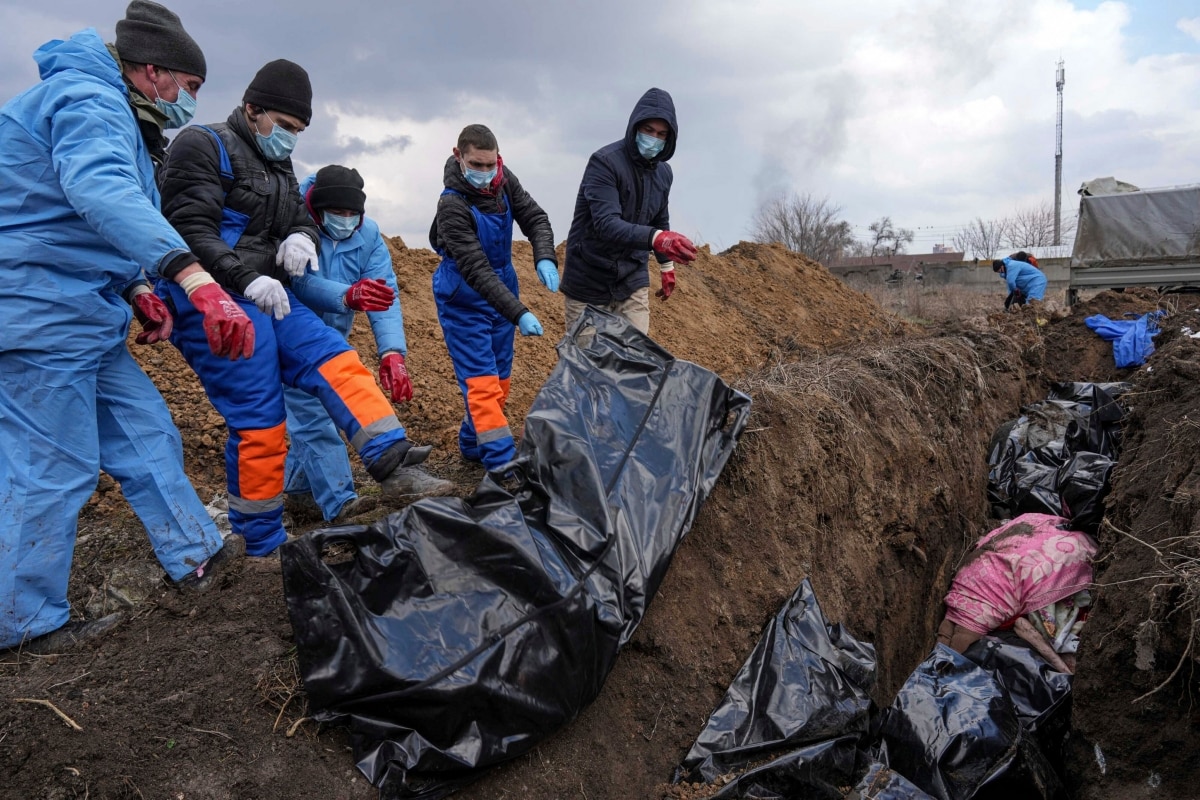 Dead bodies are placed into a mass grave on the outskirts of Mariupol, Ukraine, Wednesday, March 9, 2022 as people cannot bury their dead because of the heavy shelling by Russian forces. (AP Photo) 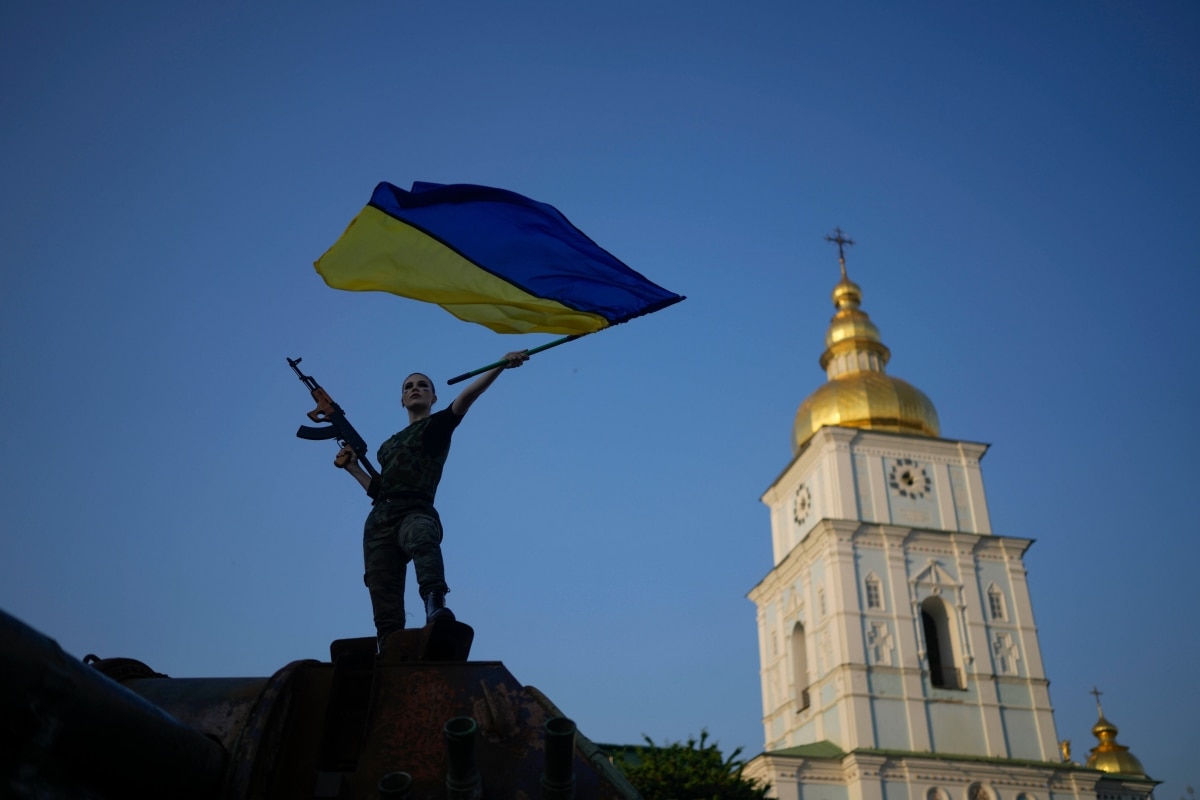 A woman brandishes the Ukrainian flag on top of a destroyed Russian tank in Kyiv, Ukraine, Friday, June 10, 2022. With war raging on fronts to the east and south, the summer of 2022 is proving bitter for the Ukrainian capital, Kyiv. The sun shines but sadness and grim determination reign.(AP Photo)