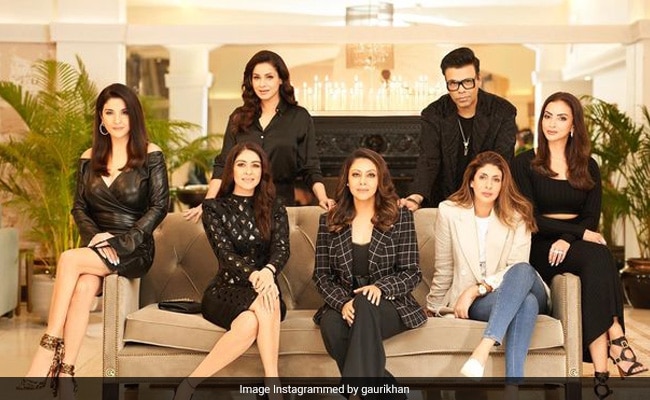 Gauri Khan, who had an extended cameo in the second season of the Netflix reality series Fabulous Lives Of Bollywood Wives 2, shared a throwback picture from a fun shoot that she did for the show along with Shweta Bachchan, The Fabulous Lives Of Bollywood Wives stars  and Gauri’s longtime friends Maheep Kapoor, Seema Sajdeh, Neelam Kothari and Bhavana Pandey. The picture also features the show’s producer Karan Johar. In her caption, Gauri Khan revealed that she “binge-watched the show” and even listed some of her favourite episodes. Gauri Khan captioned the post: “Congratulations Bollywood Wives! Enjoyed binge-watching the show. Especially episode 2,4 and 7. What a fun shoot it was.”

Fabulous Lives Of Bollywood Wives 2 is a Netflix series based on the lives of four star-wives – Seema Sajdeh (previously married to Sohail Khan), Maheep Kapoor (Sanjay Kapoor’s wife), Bhavana Pandey (wife of Chunky Pandey) and Neelam Kothari (married to Samir Soni). The series premiered on Netflix on Friday and it has been produced by Karan Johar’s Dharma Productions.