While overseeing the movers unpacking the family’s furniture into the Prime Minister’s residence, she was seen casually dressed wearing grey leggings, a light grey jumper and a £50 black fluffy H&M gilet as well as her £42 White Company faux fur sliders, a report in Daily Mail said.

The movers were seen handling a piano, a barbecue and several smaller boxes during the move when she was photographed. 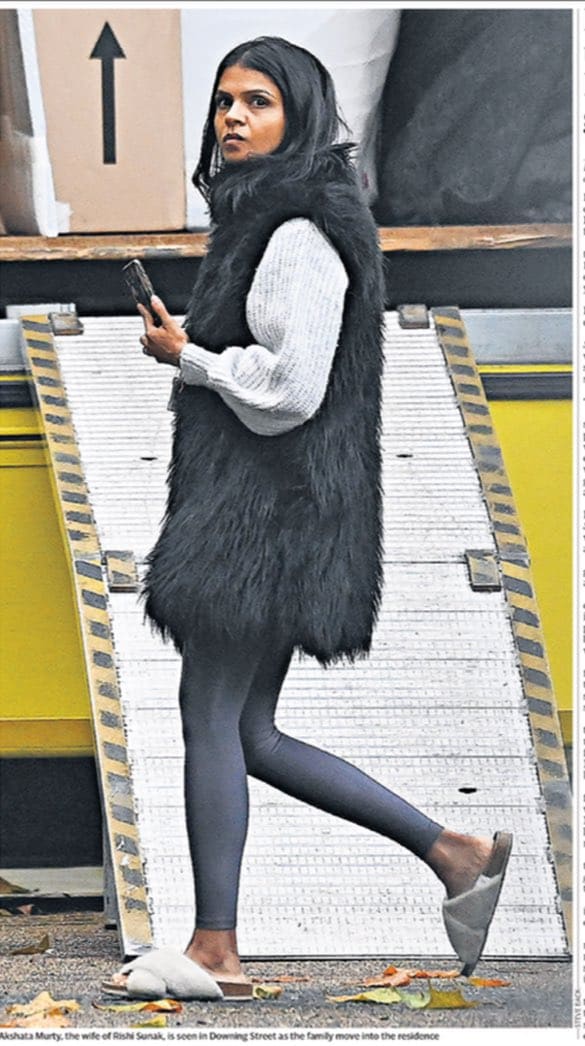 Prime Minister Rishi Sunak and Murthy had chosen to return in the flat above number 10 Downing Street, instead of moving into the more spacious flat in No 11 as has been the custom for prime ministers since 1997, when Sir Tony Blair swept to power.

Although the number 10 flat in Downing Street is in a prime location, it is relatively small.

Akshata Murty is the daughter of Indian billionaire and Infosys founder Narayana Murthy and Sudha Murthy and was born in India.

Murthy’s choice of expensive clothes and her husband Rishi Sunak has raised eyebrows before and after he was elected.

The British-born Indian heiress and fashion designer was at the centre of a row in July this year when a viral video shows her walking up to the journalists waiting outside their home and serving them tea and biscuits. Netizens pointed that the cups were from a brand named Emma Lacy and cost 38 pounds each.

Her husband, Rishi Sunak, had launched a bid to the Prime Minister’s post for the first time following Boris Johnson’s exit.

Murty, 42, is the daughter of Infosys founder NR Narayana Murthy, often described as the Bill Gates of India.

As per reports, Akshata holds a 0.91% stake in her father’s company, worth about 700 million dollars, making her richer than the late Queen Elizabeth II, whose personal wealth was estimated at about 460 million dollars by the 2021 Sunday Times Rich List.

Read all the Latest News here