Since June, Pakistan has been reeling under the effects of a monster monsoon and floods of biblical proportion that has killed over 1,200 people and injured over 3,000. At least 33 per cent of Pakistan is under water, and the season still has one more month to go.

According to estimates, the country has received 10 times heavier rainfall than usual, and one in six Pakistani residents have been affected by the season, which the World Health Organization (WHO) has termed “monsoon on steroids.”

While heavy rain continues to disrupt life in Pakistan, satellite images shared by Nasa show the extent of damage caused by one of the worst floods in the country’s history. The deadly floods have created a massive 100-km-wide inland lake due to the heavy rain and overflowing Indus river in Sindh Province. A large area of dark blue shows the Indus overflowing and flooding an area around 100 kilometres (62 miles) wide, turning what were once agricultural fields into a giant inland lake.

It’s a sharp contrast from the photo taken by the same satellite on the same date last year, which shows the river and its tributaries contained in what appear by comparison to be small, narrow bands, highlighting the extent of the damage in one of the country’s hardest-hit areas.

READ | Why should melting Himalayas scare you? Look at Pakistan

Now, colossal volumes of water are pouring into the Indus river, which flows down the middle of the country from its northern peaks to its southern plains, bringing flooding along its length. More than two million acres of agricultural land have been submerged under water.

According to Pakistan’s weather department, this year’s monsoon is already the country’s wettest since records began in 1961. In both Sindh and Balochistan provinces, rainfall has been 500 per cent above average, engulfing entire villages and farmland, razing buildings, and wiping out crops. According to Pakistan’s disaster management authority, 416 children have been killed in the floods. United Nations International Children’s Emergency Fund (UNICEF) estimate suggests that 16 million children are impacted and 3.4 million are in dire need of humanitarian support. 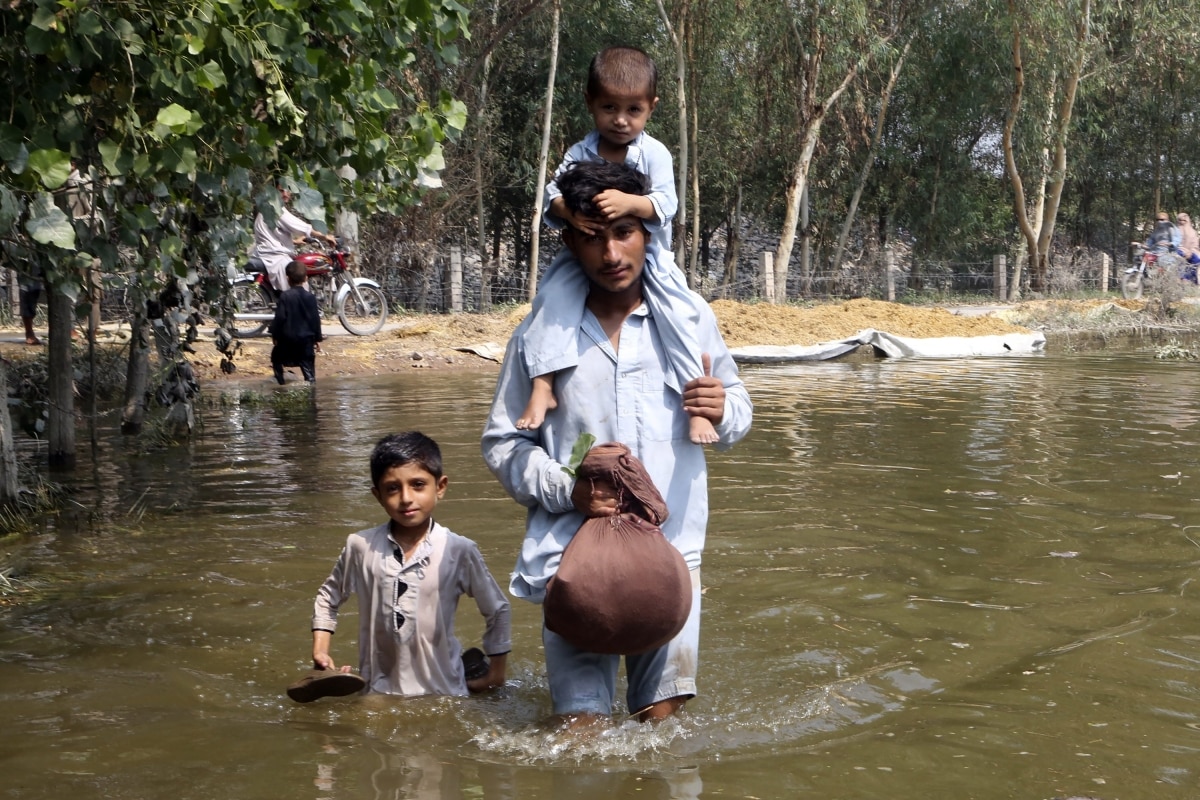 A man carries his son as he wades through floodwaters in Chardsadda, Pakistan (Photo: AP)

“One-third of the country is literally under water. The extreme monsoon flooding tells us that there is no time to waste, the climate tipping point is here,” Climate Change Minister Sherry Rehman told Reuters, summing up the climate catastrophe in Pakistan.