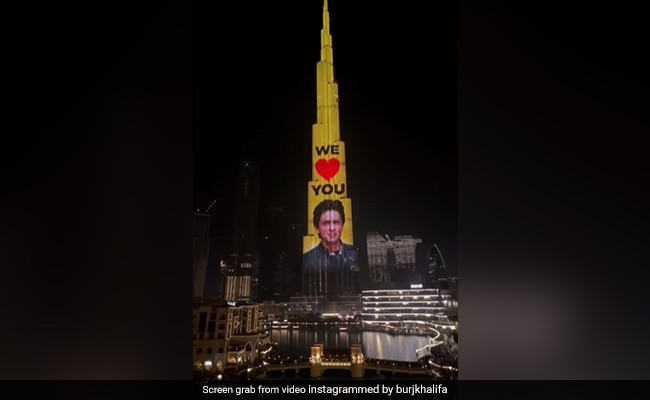 Shah Rukh Khan, once again, lit up the screen on the world’s tallest building, the Burj Khalifa on Wednesday. The occasion (no points for guessing) was the superstar’s 57th birthday. A video of the Burj Khalifa all lit up for SRK’s birthday was shared on Instagram. The text “Happy Birthday Shah Rukh, Happy Birthday Pathaan. We love you” flashed on screen as the track Tujhe Dekha To from SRK’s iconic 1995 film Dilwale Dulhania Le Jayenge played in the backdrop. The caption on the post read: “Burj Khalifa lights up in celebration of the birthday of the great Bollywood star, Shah Rukh Khan! Let’s wish him a Happy Birthday.” SRK has featured on the building multiple times.

On Wednesday evening, the actor posted a selfie of himself along with fans outside his Mumbai residence Mannat. Thanking his fans, SRK wrote: “It’s so lovely to live in front of the sea…The sea of love that spreads all around me on my birthday….thank you. Grateful for making me feel so special…And happy.”

It’s so lovely to live in front of the sea…..the sea of love that spreads all around me on my birthday….thank u. Grateful for making me feel so special….& happy. pic.twitter.com/cUjOdqptNu

Shah Rukh Khan was MIA from films since the last 4 years. However, he made a few cameo appearances. He had a special appearance in Madhavan’s Rocketry: The Nambi Effect and also in Ranbir Kapoor and Alia Bhatt’s Brahmastra. SRK has also been fairly active as a producer in the last few years. He co-produced Darlings, which marked Alia Bhatt’s debut as a film producer.

Style And The City: Priyanka Chopra’s OOTD Was This