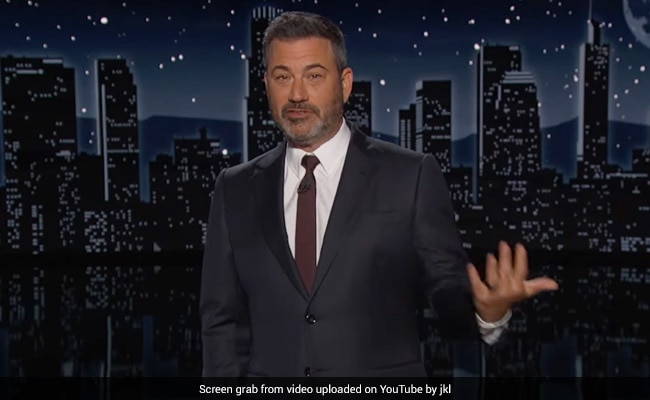 NDTV’s world exclusive with former US President Donald Trump was mentioned by popular American late-night host Jimmy Kimmel in the latest episode of his talk show.

In a recent episode, Mr Kimmel mentioned NDTV’s interview with Mr Trump and praised the news channel for fact-checking the Republican leader’s claims.

Cutting to the middle of the interview, Mr Kimmel showed NDTV journalist Sreenivasan Jain asking Mr Trump if he would run against President Joe Biden again.

NDTV fact-checked that claim by immediately putting up numbers from the 2020 US presidential elections that clearly showed Joe Biden getting 306 Electoral College votes while Mr Trump could manage 232 only.

“Can all Trump’s interviews be like this?” exclaimed Mr Kimmel. “Because he makes a clearly fake statement and cut to a graphic disproving him.”

Mr Trump’s claim of his social media venture Truth Social “doing phenomenally well” was also fact-checked by NDTV, with the financial watchdog SEC findings and media reports showing that the social media platform is in serious financial trouble, losing an estimated $6 million dollars in the first six months this year.

Mr Kimmel is a vocal critic of the former US President and routinely brings him up on his late-night show to debate on issues linked to him.