The late Queen Elizabeth II had many iconic pieces of jewellery. Did you know that one of the most valuable jewels in her collection is a platinum necklace with 300 diamonds that was gifted by the Nizam of Hyderabad as a wedding present to her in 1947? Read more about it. 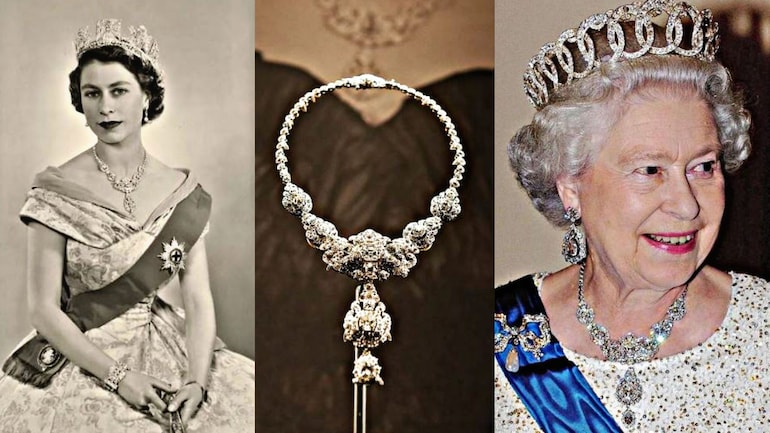 The late Queen Elizabeth II got a platinum necklace studded with approximately 300 diamonds from the Nizam of Hyderabad in 1947 as a wedding gift. (Credits: Instagram- The Royal Family)

One of the most prized pieces of jewellery the late Queen Elizabeth II owned is the iconic platinum necklace set studded with approximately 300 diamonds. It was gifted to her by the Nizam of Hyderabad in 1947, as a wedding present.

Queen Elizabeth II, who ascended the throne in February 1952, died on September 8 at the age of 96. “The Queen died peacefully at Balmoral this afternoon. The King and The Queen Consort will remain at Balmoral this evening and will return to London tomorrow,” the Royal Family tweeted.

Throughout her 70-year rule, she received many jewels. One of the most famous pieces of jewellery is the platinum necklace set studded with 300 diamonds made by the French luxury brand, Cartier.

An Instagram post on July 21 by the official account of The Royal Family featured two images of Queen Elizabeth II wearing the diamond-studded platinum necklace and a detail-rich image of the iconic necklace. The last image featured the Duchess of Cambridge wearing the same necklace.

The first photo, taken just days after Her Majesty’s Accession to the throne in February 1952, shows the young Queen in a Hartnell satin evening dress with the insignia of the Order of the Garter. This iconic image was used as the basis of The Queen’s image on stamps.

It was also the official portrait that was sent to Embassies and Regiments all over the world following her accession.

According to The Royal Family, the necklace was given to then Princess Elizabeth as a wedding present in 1947 from the Nizam (ruler) of Hyderabad. The Nizam had left instructions with Cartier in London that Princess Elizabeth should select a wedding gift herself, and this platinum necklace set with approximately 300 diamonds was chosen.

The late Queen has many iconic photos adorning the necklace throughout her reign and also loaned it out to the Duchess of Cambridge, Kate Middleton, who wore it at the National Portrait Gallery in 2014 and a Diplomatic Corps reception in 2019.