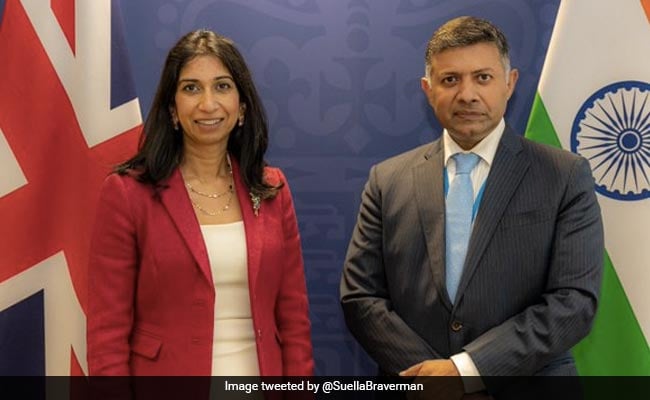 Suella Braverman in turn referenced the “strong partnership” shared between India and the UK.

Cooperation on migration and security issues was on the agenda at a meeting between UK Home Secretary Suella Braverman and Indian High Commissioner Vikram Doraiswami in London.

The envoy called on the Indian-origin Cabinet minister on Tuesday to discuss the India-UK security partnership and to “make progress” under the India-UK Migration and Mobility Partnership (MMP).

“High Commissioner Vikram Doraiswami called on HE Home Secretary Suella Braverman today to discuss India-UK security cooperation, and to make progress under the India-UK Migration and Mobility Partnership Agreement,” the Indian High Commission in London tweeted after the meeting.

Ms Braverman in turn referenced the “strong partnership” shared between India and the UK.

“I look forward to working with our friends on mutually shared interests including security and migration,” she tweeted after the meeting.

🇬🇧 & 🇮🇳 have a strong partnership. I look forward to working with our friends on mutually shared interests including security and migration. @HCI_London@UKinIndiapic.twitter.com/jdntUZCnRv

It is seen as a conciliatory move after the Indian mission had countered the Home Secretary’s allegations that the agreement with the Indian government to encourage and facilitate better cooperation on illegal migration “has not necessarily worked very well”.

“As per data shared with the Home Office, as on date, action has been initiated on all of the cases referred to the High Commission. Further, the UK has also undertaken to fulfill certain commitments as part of the Migration and Mobility Protocol, on which we await demonstrable progress,” the High Commission of India said in a statement last month.

It is a widely held view that Braverman, then Home Secretary in the former prime minister Liz Truss led Cabinet, had derailed the ongoing India-UK free trade agreement (FTA) negotiations from its Diwali timeline by expressing “concerns” over what she feared would be an “open borders” policy for Indians.

“Look at migration in this country – the largest group of people who overstay are Indian migrants,” she said at the time.

“India is projected to be the world’s third largest economy by 2050 – offering major opportunities for UK firms,” Hands tweeted after the meeting.

The Co-Chairs of the APPG, Labour MP Navendu Mishra and Lord Karan Bilimoria, as well as APPG President Baroness Sandy Verma were among those present at the meeting, also attended by the Indian High Commissioner to the UK who spoke about the scope of bilateral cooperation in sunrise sectors such green economy and FinTech.

“No Structural Audit, No Expertise”: In Gujarat Bridge Tragedy, 10 Lapses