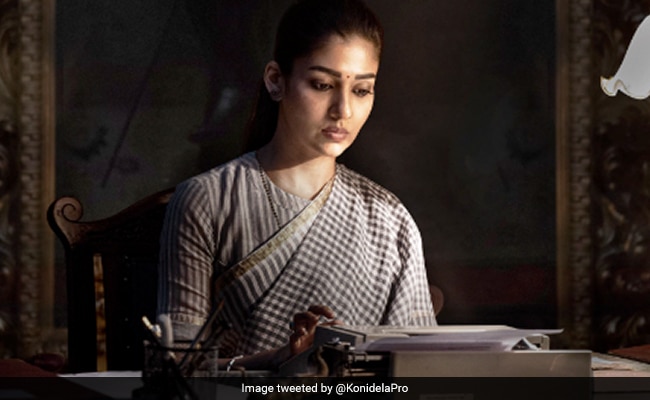 The makers of megastar Chiranjeevi’s GodFatherunveiled the first look poster of lady superstar Nayanthara from the film. On Thursday, the official Twitter handle of Konidela Pro Company shared a poster of Nayanthara, where they introduced her as Sathyapriya Jaidev. Along with Nayanthara’s first look, the makers also gave an update on the film’s first song. The post’s caption read, “Introducing Lady Superstar #Nayanthara as ‘Sathyapriya Jaidev’ from the world of #GodFather. First Single update soon. GRAND RELEASE ON OCT 5.” In the poster, Nayanthara can be seen wearing a checked saree and working on a typewriter.

Check out the poster here:

GodFather, directed by Mohan Raja is the official Telugu remake of the 2019 Malayalam film Lucifer. The film also stars megastar Chiranjeevi and Bollywood superstar Salman Khan in the lead roles. The role of Nayanthara IN GodFather, was originally played by Manju Warrier in Mohanlal’s Lucifer.

A few weeks ago, on Chiranjeevi’s 67th birthday, the makers unveiled the first look and teaser of the actor from the film. This will be the first time when the megastar will be sporting a salt and pepper look in his film career.

RB Choudary and NV Prasad have produced GodFather, while Konidela Surekha will be presenting the film.

The film also stars Liger filmmaker Puri Jagannadh in an important role. Actors Satyadev Kancharana, Murali Sharma, Samuthirakani, Gangavva, Sunil, Brahmaji and Divi Vadthya will also be seen in the film. Thaman S composed music for the film. GodFather is all set to hit the big screen on October 5, coinciding with Vijayadashami.