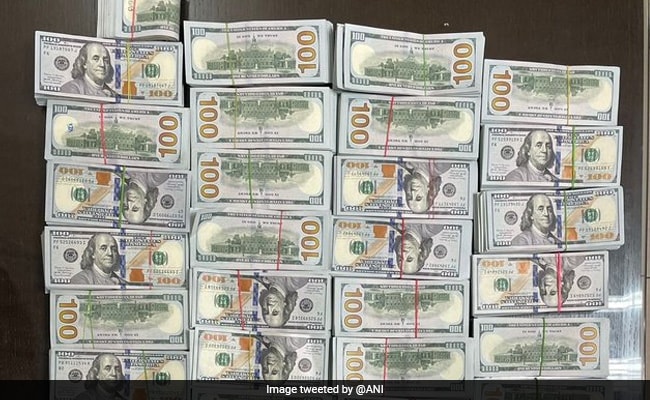 The arrested accused were sent to judicial custody.

Three members of a family were arrested and foreign currency worth 4,97,000 USD (Rs 4.1 crore) was seized from them, said officials.

According to officials, the recovery was made in a targeted operation carried out by the Mumbai Air Intelligence Unit (AIU) on Wednesday.

Three Indian passengers, of a family, travelling to Dubai via Fly Dubai flight FZ 446 were intercepted and currency worth 4,97,000 USD, equivalent to approximately Rs 4.1 crore, seized, a customs official said.

#WATCH | In a targeted op by AIU, Mumbai Airport Customs, a family of 3 Indian pax going to Dubai were intercepted. The baggage examination of the 3 led to seizure of foreign currency worth 4,97,000 USD (approx Rs 4.1 Cr). All 3 passengers were arrested: Customs

The arrested accused were sent to judicial custody.

On October 27, the Mumbai airport customs apprehended two Indians with gold worth over a crore in wax form.

The accused had arrived from Dubai and were carrying the gold in wax form wrapped around their legs, customs officials said.

In a similar haul on October 14, the Mumbai airport customs had arrested an Indian passenger with 16 kg gold worth Rs 8.40 crore. The person had arrived from Addis Ababa, the capital of Ethiopia.

“No Information Now That Anyone Is Missing”: Official On Gujarat Tragedy