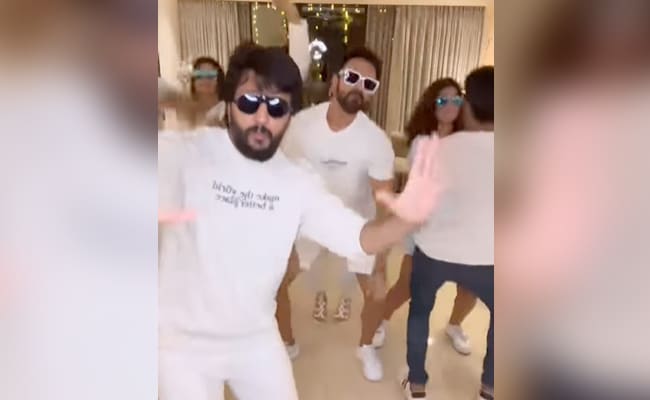 A still from the video. (courtesy: geneliad)

Riteish Deshmukh and his group are back with another entertaining video. This time, they are grooving to the upbeat track of Kala Chashma from the film Baar Baar Dekho. To say the least, the clip is unmissable. FYI: The video features Riteish, his wife Genelia D’Souza, Ashish Chowdhry, Samita Bangargi, Jennifer Winget, Shabir Ahluwalia, Kanchi Kaul, and Mushtaq Shiekh. The video begins with Riteish and Mushtaq dancing, and then we can see the group, who are colour-coordinated in white outfits and sunglasses. Next, we have the oh-so-perfect twerk from Ashish. Don’t miss Shabir and Genelia’s dance moves. Sharing her version of “Monday Reels”, Genelia wrote, “And when the gang meets… It’s just – This is us… what a mad gang we are.” We could make out from her caption that the get-together was hosted by Ashish Chowdhry and his wife Samita Bangargi. The actress also mentioned that they missed two other members of their “mad gang.” “Hussain Kuwajerwala and Tina Kuwajerwala, we missed you guys,” Genelia added.

Don’t know about you but we think Riteish Deshmukh and Genelia D’Souza deserve the award for best Instagram Reels. From their funny banters to those quirky dance moves, the duo has always managed to leave us in splits. This is just another video of Genelia grooving in her element. This time with the team of her upcoming film Mister Mummy. Alongside the clip, she wrote, “Last Leg of Mr Mummy and my heart already aches… Such a fun team, such amazing people and come to think of it, it’s the first interaction with most of the team. I always feel while shooting a film it’s most important one should enjoy the journey and Hell yaaa we did…”