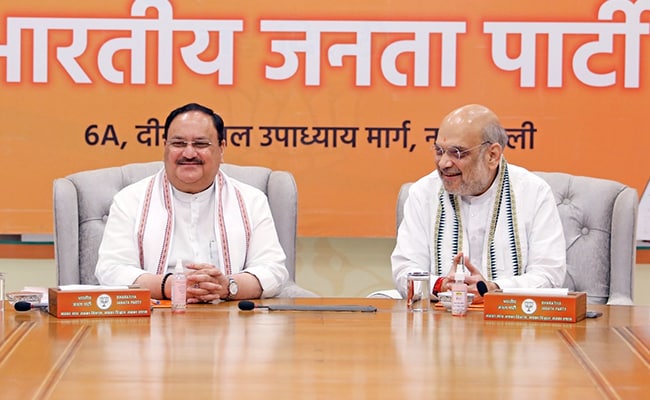 BJP ministers who failed to carry out allotted tasks on groundwork for 2024 elections were given a stern warning by party chief JP Nadda and chief strategist Amit Shah at a brainstorming session on Tuesday. Sources told NDTV that ministers who did not visit parliamentary constituencies allotted to them for the mandatory recce, were told off by Mr Shah.

“Prime Minister Narendra Modi is most popular. Anyone can win on PM Modi’s name. But if there is no organisation on the ground, we will not be able to take advantage of it,” the sources quoted him as saying.

The BJP has set a target of 350 seats for 2024 and has started planning 20 months ahead of elections. The party is particularly focussing on the 144 constituencies it failed to win by narrow margins in 2019. The plan is to win at least 70-plus of those 144 seats, sources said.

The BJP had won 303 of the 543 Lok Sabha seats in 2019 — the first time in decades a party got majority on its own. But more than 100 seats were won by the opposition, of which the Congress got the maximum — 53 seats.

The 144 constituencies were parcelled out among the ministers, who were told to visit there regularly and gather exhaustive information.

The ministers were asked to find out the status of the welfare schemes implemented — Central or state — and even the number of beneficiaries. The information was to be uploaded on a web portal called “Saral”. The ministers were told to visit assigned constituencies regularly, sources said. They were also told to distribute their time between the government and party work.

“Strong organisation base plus PM Modi’s charisma will be the winning formula for 2024,” sources quoted Mr Shah as saying.