After the announcement by Iraq’s influential Shi’ite Muslim cleric Moqtada al-Sadr to quit politics, his supporters took to the streets in protest. 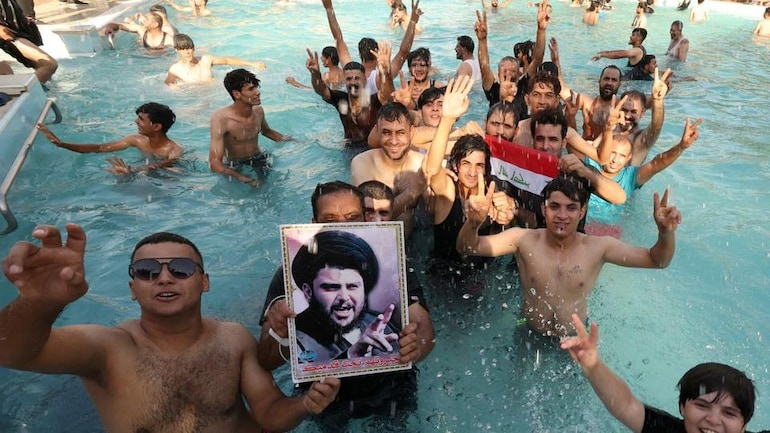 Protests inside the Republican Palace ensued after Sadr announced to step down from politics. (Reuters)

Two months after the unprecedented Sri Lankan political turmoil wherein thousands of protestors stormed the presidential palace in Colombo, similar sights were visible in Baghdad city in Iraq. Following the announcement by Iraq’s influential Shi’ite Muslim cleric Moqtada al-Sadr to quit politics, his supporters took to the streets in protest and skirmishes between the rival-backed groups and his loyalists ensued.

As per news agency AFP, not less than eight protestors have died in the clashes in Baghdad and security forces resorted to tear gas to disperse an angry crowd.

In videos which are being widely circulated, protestors can be seen storming the presidential palace, akin to visuals from Sri Lanka after President Gotabaya Rajapaksa’s ouster from office and exit from the island nation.

At a time when Iraq is witnessing a political deadlock, Sadr’s supporters or his rivals’ supporters were seen availing luxuries at the president’s residence.

Reports suggest that shots were fired by guns and weapons while Sadr’s supporters and Tehran-backed units hurled stones at each other. The incident took place in Baghdad’s Green Zone, an area where ministries and embassies are situated. The Iraqi military imposed a curfew at 3:30 pm and urged protestors to vacate the Zone.

The country is reeling under a political deadlock since Sadr’s party secured the largest majority in October parliamentary elections but did not secure enough seats to form a government. The poll results were followed by his refusal to form a coalition government with his rivals, including the Iran-back Shi’ite. Now, his decision to quit politics has triggered uncertainty for a country of more than four crore population.