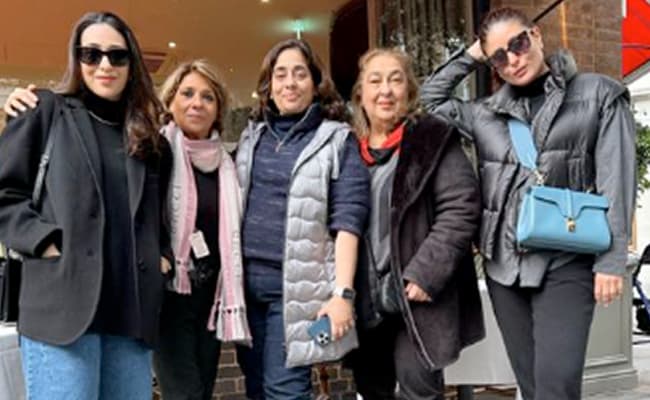 Kareena Kapoor is busy shooting for her next film in London. But she also manages to scoop out some time from her schedule to make memories with her family. After spending her day off with her son Jeh in a park, Kareena went on a lunch date with her sister, actress Karisma Kapoor, aunt Rima Jain and cousin Nitasha Nanda. They were also accompanied by friend Haseena Jethmalani. The Laal Singh Chaddha actress, on Thursday morning, posted a photo on her Instagram Stories. She is seen posing with her family and friends outside what appears to be an eatery. Kareena Kapoor looks uber cool in an all-black outfit, which she paired with a blue sling bag. Karisma Kapoor opted for a black turtle neck top, blue jeans and a black blazer for the luncheon.

Sharing the photo, Kareena Kapoor wrote, “Lunching with the ladies.” 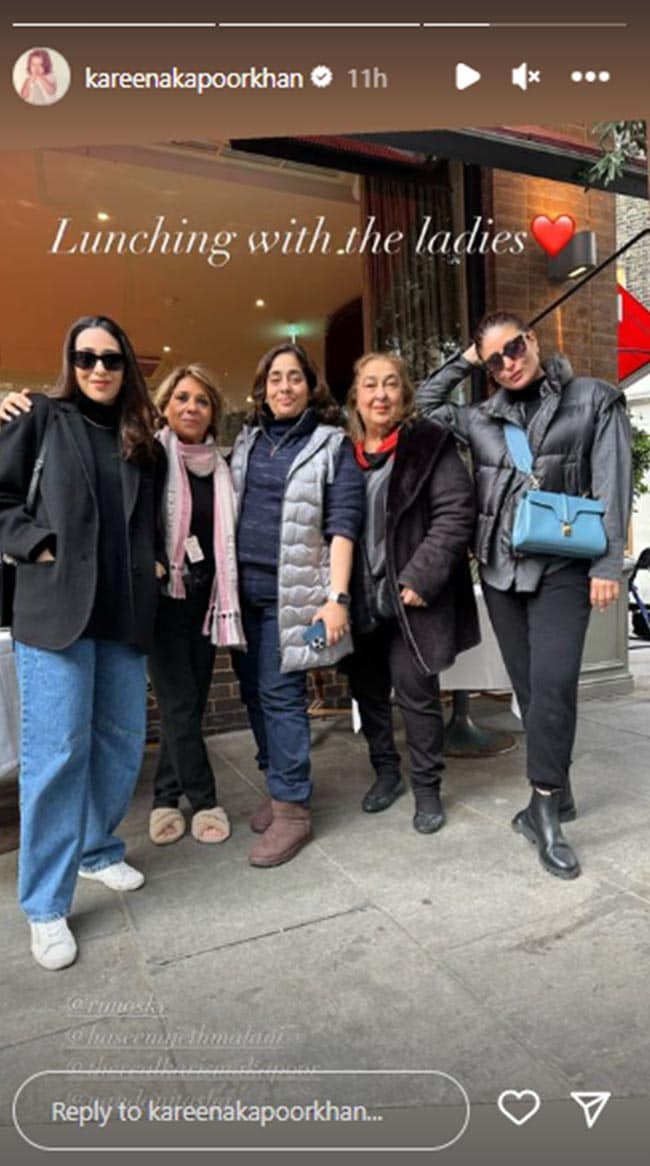 Kareena Kapoor is filming her next with director Hansal Mehta and producer Ekta Kapoor. Whenever she gets time between shooting, the actress spends some time with her younger son Jeh. On Wednesday, she posted some aww-dorable photos of tiny Jeh playing around a tree in a park. Kiss a tree…Be free…Fall with the love of my life,” Kareena wrote in the caption and added, “Day off from work…Loving it.” Reacting to the post, Anushka Sharma, Malaika Arora, Neha Dhupia and many other celebs dropped red heart icons.

Kareena Kapoor began shooting for Hansal Mehta and Ekta Kapoor’s film in October. She returned to her home in Mumbai a few days ago to celebrate Diwali with her husband Saif Ali Khan and their sons.

Back at work, Kareena Kapoor shared this from the sets of her work-in-progress film.

Kareena Kapoor was last seen in Laal Singh Chaddha alongside Aamir Khan. The film is a Hindi remake of the all-time classic Hollywood film Forrest Gump. Her upcoming projects also include The Devotion Of Suspect X, in which she will be seen alongside Vijay Varma and Jaideep Ahlawat.

Genelia D’Souza’s Day Out In The City