Iran has begun to use cryptocurrencies to settle cross-border trade dealings, as the country seeks alternatives to the US dollar and the international banking system.

The chairman of the Iran Trade Promotion Organisation (ITPO), Ali Reza Peymanpak, announced on August 9 that the first formal import order utilising cryptocurrencies had been placed “this week.” Peymanpak, who is also a deputy minister of industry, mine, and trade, did not specify what commodities or services were swapped or with whom but stated the deal was worth $10 million.

It is expected that countries like Iran will start using smart contracts more for foreign trade to escape sanction-related restrictions. This is significant given Iran and Russia have engaged closer in recent months to reduce the reliance on the US dollar for bilateral trade and have also proposed to launch a new settlement system using their respective currencies. Until then, the cryptocurrency means of doing business will give them an uninterrupted way to do business.

In early 2019, Iran’s government brought in a ban on the trading of cryptocurrency within the country. This was more to do with the mushrooming of thousands of crypto-mining facilities in Iran, thereby heavily impacting the supply of power across the country. The mining of cryptocurrency coins and tokens is a competitive process that verifies and adds new transactions to the blockchain for a cryptocurrency that uses the proof-of-work (PoW) method. The miner that wins the competition is rewarded with some amount of currency and/or transaction fees. A miner, in today’s world, would ideally need computers with a large number of high-end GPUs. This process consumes a lot of electricity. Hence, the increasing number of miners in the country led to widespread power blackouts. Just last week, Iranian authorities announced the seizure of close to 10,000 illegal cryptocurrency-mining devices over the last five months, with many of these found in public locations, such as schools and mosques that predominantly get free or subsidised electricity. 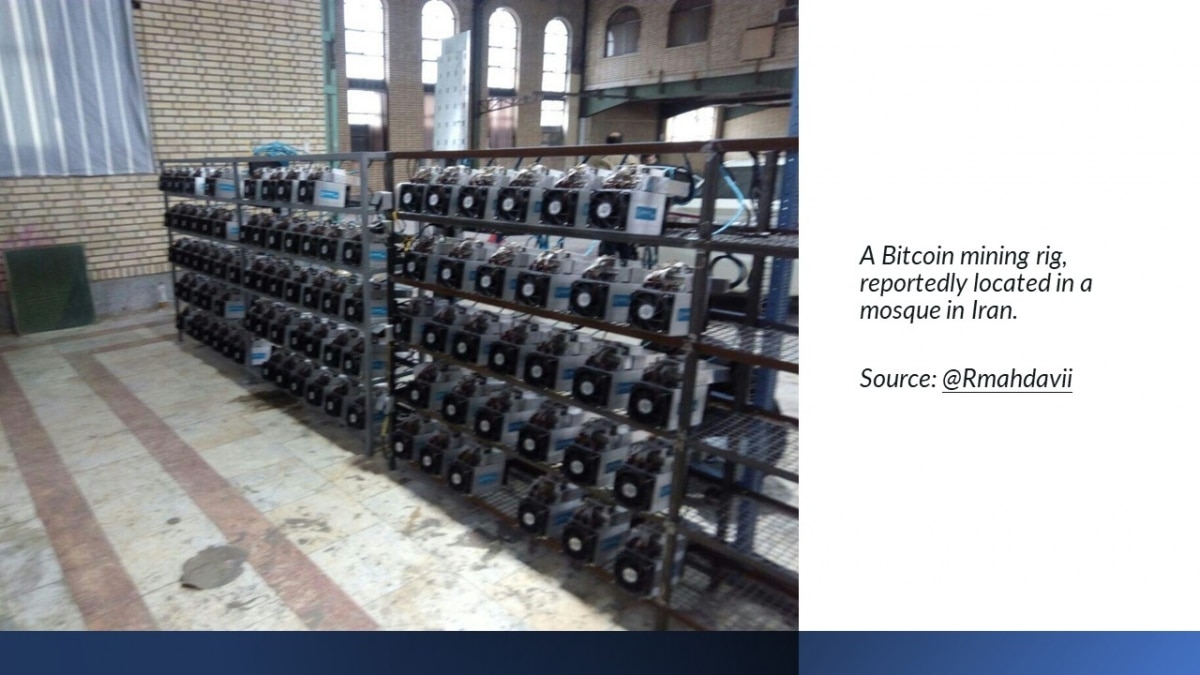 However, Iran did not completely ban the usage of cryptocurrencies like Bitcoin and Ethereum. This was more to do with the use of highly valued cryptocurrencies for international trading and exports. In October 2020, Iran amended a law to allow imports to be funded using cryptocurrency. The government agencies felt this would help them circumvent restrictions imposed on them owing to American sanctions. But this use was only restricted to funding imports into Iran.

The source of the cryptocurrencies will be the thousands of miners within Iran. In 2019, Iran implements a licensing system for bitcoin miners. It necessitates registration, the payment of a small premium for power, and the sale of all mined bitcoins to Iran’s national bank. It is critical to note that an estimated 4.5% of all Bitcoin mining in the world happens in Iran, according to blockchain analytics firm Elliptic. 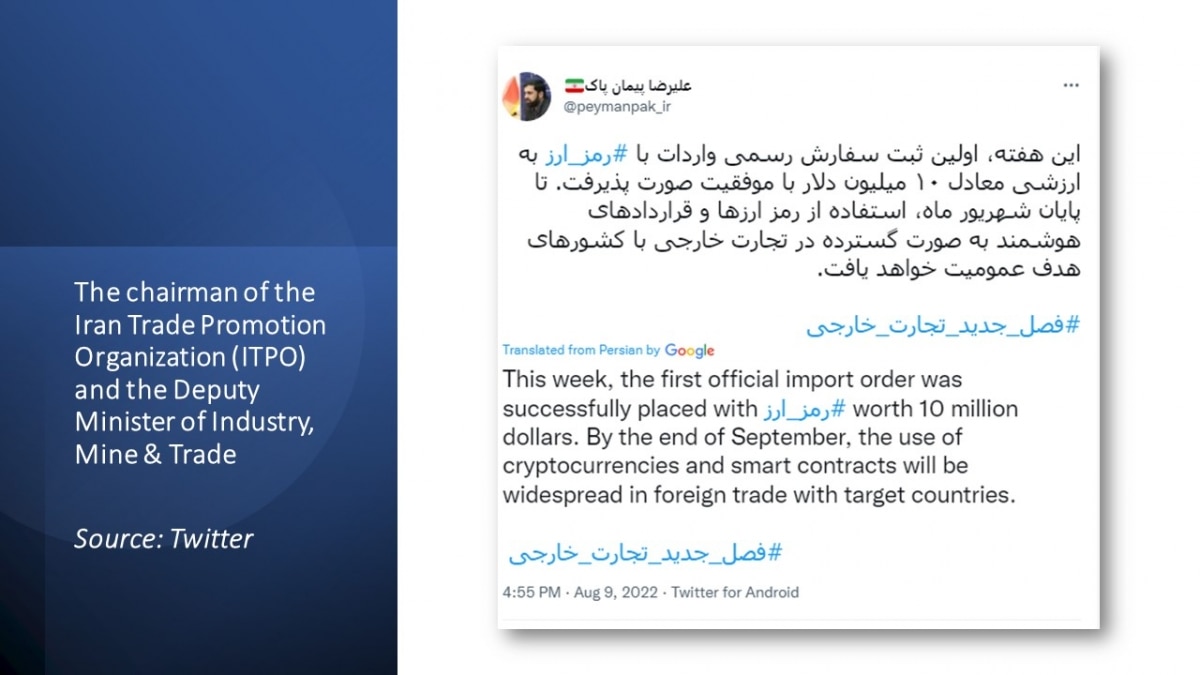 The chairman of the Iran Trade Promotion Organisation (ITPO), Ali Reza Peymanpak, addressed the Iranian media earlier this year on the topic of the use of cryptocurrency for cross-border trade. “These cryptocurrencies and blockchain systems have many practical discussions in business affairs,” Peymanpak told Iran’s Mehr news agency. “If we neglect it, we will lose a major part of business opportunities.” He went on to say that “In our main markets, such as Russia, China, India and Southeast Asia, the use of crypto-currencies is popular.”

How is Iran trading using cryptocurrency?

The announcement by Iran’s deputy trade minister on the use of cryptocurrency for bilateral trade was interpreted as a message from Tehran that it had discovered a way to circumvent international sanctions that had cut it off from SWIFT, the world’s largest bank-transfer system, and had hampered Iran’s ability to import weapons and foreign technologies for decades. Thanks to the sanctions imposed by the USA over Iran’s alleged nuclear programs, Iran has always been on the lookout for transactions that are anonymous in nature, untraceable, and do not fall under the ambit of international regulators.

While sceptics still view cryptocurrency transactions as something that may not be 100% anonymous with respect to the two parties that are involved, it is still the quickest way of carrying out a safe and untraceable transaction. This is because, even though cryptocurrency transactions are recorded on a blockchain (which is generally public), at the same time, crypto trades are not necessarily linked to an identity, which provides a bit of anonymity for users.

Now, Russia, which is in a soup for its invasion of Ukraine, and fighting to maintain trade relations with the EU, the USA, and other countries. This also makes Russia, which was always a pioneer in getting into the cryptocurrency mining world, a prime player to get involved in using the mechanism to get around trade barriers. Sources also say Iran and Russia may engage in bilateral trade via this route.

Iran’s bold declaration of doing trade with countries using smart contracts is something we will still have to see going through. Smart contracts are just customised programs stored on a blockchain that run when a certain group of predetermined conditions are met. They typically are used to automate the execution of an agreement so that all parties can be immediately certain of the outcome, without any intermediary’s involvement or time loss. But in this case, experts opine that it is a very remote possibility that Iran gets what it wants while dealing with crypto-linked trades.

A supplementary question is how many legitimate corporations and countries would want to risk doing business with Iran and getting found out later to face sanctions of their own? And why would Iran want to publicly advertise this other than to provoke the United States? Aside from Kalashnikovs or small arms, large arms deals and buying of planes or ships don’t yet happen via cryptocurrency-based transactions. So, there are limited options for Iran.

Is it a permanent solution? What about regulations?

Recent cases of crypto-related investigations have also shown that the claimed transparency in crypto-based transactions can be broken with a lot of effort put in.

Earlier this year, $3.6 billion worth of Bitcoin was seized from a couple in the US who was charged with a case of money laundering. This was in connection with the 2016 hacking of the Hong Kong cryptocurrency exchange “Bitfinex”. This became one of the largest financial seizures by the Justice Department. The investigation agencies went through great pain to do the unthinkable in terms of tracing the illicit funds stolen via bitcoins going through a complicated web of transactions across multiple countries.

The entire investigation took slightly more than six years. This has brought about renewed interest in discussions surrounding the degree of traceability of such transactions and, more notably, the identification of transactions that display unintentional patterns which can easily be spotted and tracked as outliers.

The USA has also stepped-up efforts and the US treasury department is currently investigating Kraken, a U.S.-based crypto exchange, for allowing customers in Iran to carry out virtual trades. Following this, numerous other entities like Coinbase are also being questioned for allowing transactions carried out to evade sanctions and compliance has become a huge talking point.

It is important to note that Iran is constantly looking to replace the US dollar as the currency to do business with others and has already started trading with Russia using the Ruble. Iran’s economic minister, Ehsan Khandouzi, also expressed the country’s desire to replace the dollar in business with China, Turkey, and India.

While it is highly unlikely that India would want to hold trades with anyone via cryptocurrency, let alone Iran, India has been steady with its trade relationship with Iran and has also been exploring settling the trade in Rupee along with establishing a banking mechanism between the two countries, similar to what Iran and Russia are exploring.