“If I am guilty, why are you questioning me? Just come and arrest me if you can,” said Jharkhand Chief Minister Hemant Soren today, calling central probe agency ED’s summons to him “part of a plot to harass a tribal chief minister”.

“The BJP has unleashed central forces to destabilise a democratically elected Jharkhand government. I am not afraid of ED and CBI… This is misuse of constitutional institutions to suppress the voice of anyone who opposes them,” he added, addressing party workers about the Enforcement Directorate’s allegation that he laundered money in a “coal mining scam”.

“This conspiracy will get a befitting reply,” he said.

He was asked to appear at the ED’s regional office in Ranchi today but he did not. Instead, he addressed workers of the Jharkhand Mukti Morcha, which has a coalition state government with the Congress, outside his house.

Telling the crowd that he will fly to Raipur (Chhattisgarh) to attend a tribal festival during the day, he accused the BJP-led central government of letting fugitive businessmen go scot-free while being busy with political vendetta.

The vendetta charge is part of a larger faceoff.

Mr Soren faces disqualification as MLA on the BJP’s complaint for granting himself a mining lease while holding office in 2021. The Election Commission has reportedly recommended to to Governor Ramesh Bais that the action be taken against him. But the Governor has kept that hanging, even though Mr Soren has asked for the “envelope” to be opened immediately.

Before that came allegations of “Operation Lotus” — the BJP allegedly trying to unseat the JMM-Congress alliance — as some MLAs were stopped in neighbouring Bengal with around Rs 50 lakh in cash. 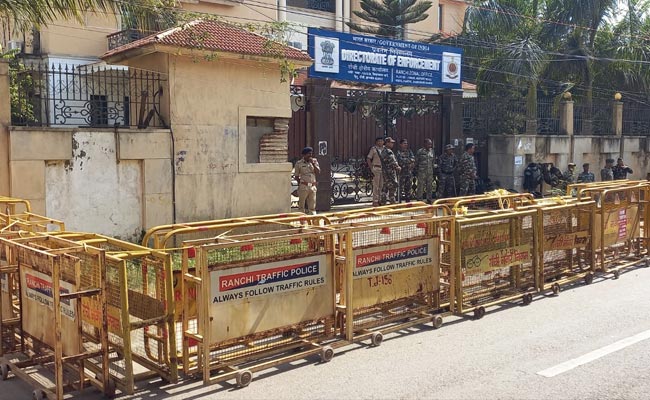 Mr Soren has linked it to his tribal identity — more than a fourth of the state’s population belongs to Scheduled Tribes.

Without naming the BJP, he said on Twitter earlier today, “The objective behind the attempt to harass me is to block the rights of tribals, backwards and minorities.” Feudal people deprived and exploited people to succeed, he said: “Our ancestors have not taught us to lose. They have taught us to fight and win.”

He reiterated this in his speech and said rivals are “unable to accept that our government has done exemplary work for all sections of society”.

He further invoked the legend of Eklavya — Dalit communities often cite the Mahabharata story to cite exploitation of backward groups — and the legacy of tribal heroes, such as Santhal leaders Sidhu-Kanhu. “The people will respond to every conspiracy.”

The BJP has said he’s acting out of “frustration” because “his corrupt government stands exposed”.

The ED has already arrested his aide Pankaj Mishra and two others in the case, after raids in July and seizure of Rs 11.88 crore from the Mr Mishra’s bank accounts. The agency claimed to have found Rs 5.34 crore in “unaccounted” cash from Mr Mishra’s home. Three months ago, the ED questioned Mr Soren’s press adviser, Abhishek Prasad, too.