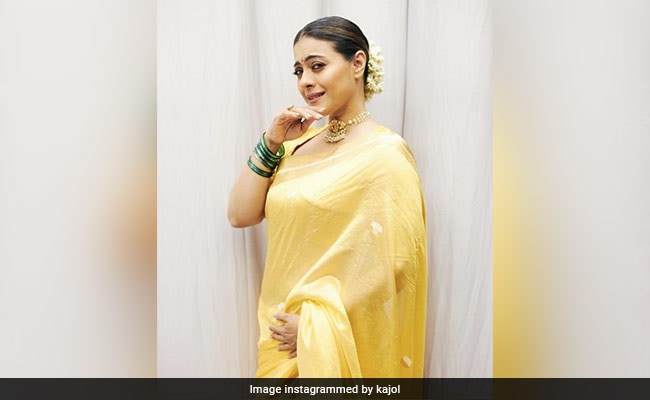 Kajol, keeping up with the festive mood, shared a set of stunning pictures on her Instagram profile on Monday. The 48-year-old actress shared a set of photos, in which she can be seen dressed in a yellow saree and she looks pretty as ever. Kajol accessorised her look with a statement necklace and some bangles. Kajol, striking a couple of poses in the album, captioned it: “Going Ganpati bappa mad!#ganpatibappamorya #lalbaughcharaj. Come on people gimme a smile.” In not time, Kajol’s post was flooded with heart emojis from her fans.

See the photos shared by Kajol:

Kajol, on the first day of Ganesh Chaturthi, shared a couple of pictures of her OOTD – a red saree and she had simply captioned the post: “Ganpati Bappa Morya.”

Here’s the post Kajol shared from her festivities last week:

Kajol’s husband and actor Ajay Devgn had posted this from his festivities last week:

In terms of work, Kajol was last seen in the Netflix film Tribhanga, which marked her digital debut. Produced by Ajay Devgn, Tribhanga was directed by Renuka Sahane and it also starred Tanvi Azmi and Mithila Palkar. She will next be seen in Revathy’s Salaam Venky.

Kajol and Ajay Devgn met on the sets of Hulchul and later got married in the year 1999. They have worked together in several films such as Gundaraj, Ishq, Dil Kya Kare, Raju Chacha, Pyaar Toh Hona Hi Tha. The couple welcomed their daughter Nysa in 2003 and their son Yug was born in 2010. The couple were last seen together in the 2020 period drama Tanhaji: The Unsung Warrior, also starring Saif Ali Khan.