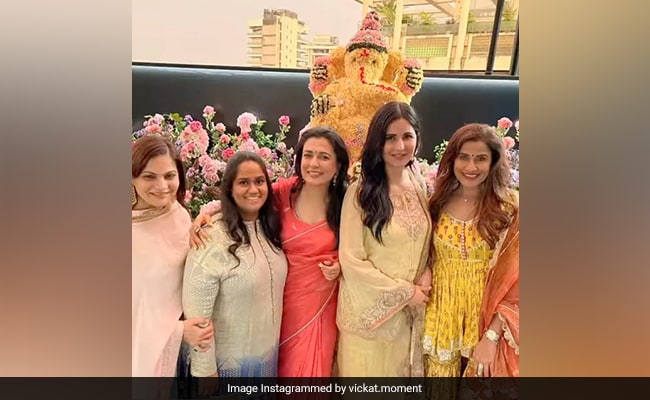 A picture of Katrina Kaif along with Salman Khan’s sisters Arpita Khan Sharma and Alvira is trending big time on social media. The picture also features Mini Mathur and celeb fitness trainer Yasmin Karachiwala. The picture was initially shared by Yasmin Karachiwala on her Instagram stories on Thursday afternoon. She captioned it: “Ganpati Bappa looking too cute. Thank you Arpita Khan Sharma.” Katrina Kaif, who has been friends with Arpita Khan Sharma for the longest time, attended the Ganesh Chaturthi festivities with her husband Vicky Kaushal. Mini Mathur’s plus one for the festivities was her husband Kabir Khan. Arpita’s brother Salman Khan also attended the celebrations.

Check out the post shared by Salman Khan here:

Arpita Khan Sharma shared these pictures from the Ganesh Chaturthi festivities at her home.

Katrina Kaif married Vicky Kaushal in December last year, after dating for 2 years. They hosted big, fat wedding festivities in Sawai Madhopur, Rajasthan. They hosted a private wedding in the presence of family members and very few friends from the film industry. Katrina Kaif and Arpita have been friends for the longest time. Arpita, who was not invited to Katrina Kaif and Vicky Kaushal’s wedding last year, had told Etimes just before the wedding: “We have not been invited. So, how would we go?” Last month, Katrina Kaif wished Arpita Khan Sharma in an adorable birthday note.