The cable bridge in Gujarat’s Morbi snapped on Sunday, killing 135

The municipal body chief of Gujarat’s Morbi city where a cable bridge snapped on Sunday, killing 135, was questioned by the police for four hours today.

Sandeepsinh Zala, the municipal corporation boss, was asked to explain the fine print of the agreement signed with Gujarat-based watchmaker Oreva to renovate the century-old cable bridge.

Documents listed in a local court that is looking into the tragedy show that the contractors hired for the renovation job were not qualified for such work. The subcontractor only painted and polished the cables for renovation. The same firm, although unqualified, had been given a contract in 2007 as well.

One of the important questions the police asked Mr Zala was whether during the signing of the agreement with Oreva they had determined how many people the old bridge can hold without compromising safety.

Investigators have said the contract was signed with Oreva directly without going through a bidding route.

There has been criticism against the police for allegedly not going after the top bosses of Oreva group, including Ajanta Manufacturing Pvt Ltd, which has a huge presence in BJP-ruled Gujarat. The nine people arrested in the case are some Oreva employees and security guards who were tasked with crowd control at the bridge. 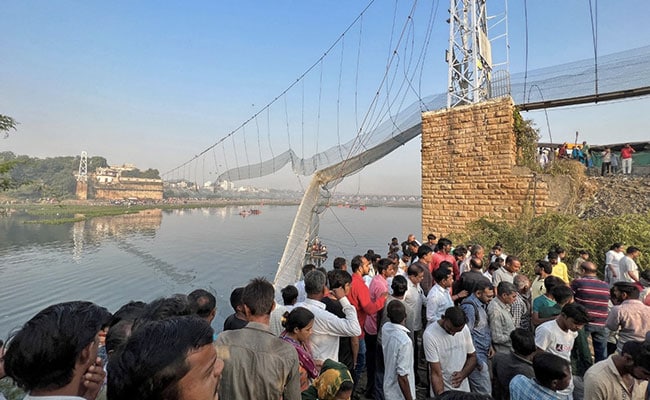 The police denied the allegations. They said they are not trying to shield anyone, but in fact trying to trace the root of the agreement signed between the municipal body and a firm that had no experience for this kind of project.

“We are investigating every aspect. We are establishing the chain of events from the starting point till the incident. We will act against all those found culpable in the matter,” Morbi police chief Rahul Tripathi told reporters.

Mr Tripathi denied allegations of shielding government employees and the company’s owner. “We are not shielding anyone,” he said.

The owner of Oreva and Ajanta Manufacturing is not named in the First Information Report, or FIR. The assembly election is also due in Gujarat in less than two months.

Gujarat’s top forensics laboratory has found that the bridge collapsed under the weight of the huge rush of people. The swelling crowds put stress on the structural integrity of the bridge, leading to the tragedy. The contractor only laid fresh tiles on the bridge but did not change the old cables.