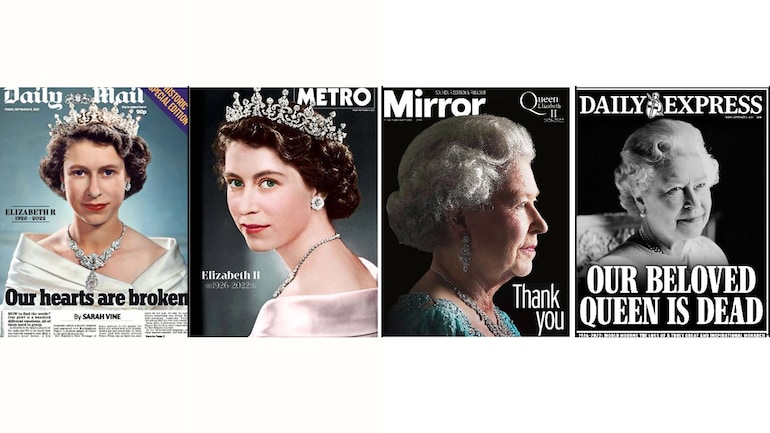 While the front pages of the United Kingdom’s newspapers commemorated a sombre day for the country following the death of Queen Elizabeth II, other global media houses also reworked their homepages to pay their tributes.

Consequently, the crown passed to her son and heir, King Charles III.

ALSO READ | Elizabeth II and her love for dogs: The Queen had more than 30 corgis

In recent months, the Queen appeared visibly frail and had a series of withdrawals from public engagements. She had taken to walking with a stick and was also seen touring the Chelsea Flower Show in a motorised buggy.

The front pages of UK newspapers have made it a point to serve as a lasting memory of the day.

The Sun replaced its usual red top with regal purple and went with the headline “We loved you Ma’am”.

On tomorrow’s front page: ‘We loved you, Ma’am’ https://t.co/0omqhOXoZY pic.twitter.com/4RQIFr19tm

The Mirror’s chose to stick to the simple message “Thank you”.

The Express commemorated the day, scribbling “Our beloved Queen is dead”.

The Daily Mail published a “historic special edition” under the headline, “Our hearts are broken”.

Our hearts are broken: It just seems unimaginable. That wisest and most steadfast of women, our guiding light in the darkest of nights, has gone.https://t.co/A6XLugMvCv pic.twitter.com/EmSjFuB8cC

Meanwhile, other global media houses, too, reworked their homepages to express grief. The New York Times chose simple headlines to describe the Queen’s life and grace.

ALSO READ | Queen Elizabeth passes away at 96. The Crown to Spencer, all the times she was portrayed on screen