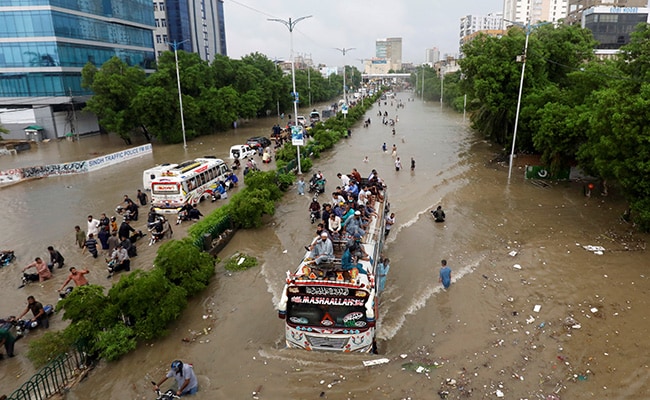 The death toll from the devastating floods in Pakistan neared 1,100 Monday, as international aid began to trickle in following Prime Minister Shehbaz Sharif-led cash-strapped government’s desperate appeal for aid to deal with the crisis that has displaced 33 million or one-seventh of the country’s population.

At least 1,061 are dead and 1,575 injured, according to the latest data issued on Monday by the National Disaster Management Authority, the chief national organisation tasked to deal with natural calamities.

It said that about 992,871 houses were totally or partially damaged, leaving millions without access to food, clean drinking water and shelter.

Around 7,19,558 livestock are also dead, as millions of acres of fertile farmlands have been inundated by weeks of constant rains.

Officials said the final death toll could be much higher, a grim forecast as thousands of villages in Khyber Pakhtunkhwa province remain cut off from the rest of the country as swollen rivers destroyed roads and bridges, the Express Tribune newspaper reported.

Unable to cope with one of the worst catastrophes, Pakistan sought international help and the world has responded, with humanitarian assistance and solidarity messages coming from several countries.

Citing an aide to Pakistani Prime Minister Sharif, the BBC said the country was desperate for international support.

“Pakistan has been grappling with economic issues, but now just when we were about to overcome them the monsoon disaster hit,” Salman Sufi said, adding that funding from a lot of development projects had been rerouted to the affected people.

The US, UK, UAE and others have contributed to a disaster appeal, but more funds are needed, officials here say.

Queen Elizabeth said she was deeply saddened by the loss of lives and property in Pakistan due to the floods, asserting that the UK stands in solidarity with the country.

In a message to President Arif Alvi, Queen Elizabeth said: “I am deeply saddened to hear of the tragic loss of life and destruction caused by the floods across Pakistan. My thoughts are with all those who have been affected, as well as those working in difficult circumstances to support the recovery efforts. The United Kingdom stands in solidarity with Pakistan as you recover from these terrible events.” British Prime Minister Boris Johnson said that it’s heartbreaking to see the continuing devastation wrought by the floods in Pakistan.

“My thoughts go to the victims and those helping with an heroic relief effort. The United Kingdom is sending support and continues to stand by the people of Pakistan in their hour of need,” he tweeted.

Pope Francis on Sunday exhorted the international community to help Pakistan, adding that he was praying for the victims.

Last week, the UN said it had earmarked 2.6 million pounds for relief measures in the country.

The first Turkish plane with relief goods for flood victims arrived on Sunday.

Similarly, the Turkish Red Crescent Society is providing cash assistance of Rs 16,000 and 300 kits, 600 jerry cans, and 1,500 mosquito nets to 300 families in Jafferabad.

Moreover, 100 tents and 1,000 blankets will be sent by air cargo along with humanitarian aid by the Ministry of Interior, Disaster and Emergency Management Presidency of Turkiye said.

The first flight from the UAE, carrying over 3,000 tonnes of relief goods arrived at the PAF Base Nur Khan on Sunday.

At least 15 planeloads of relief goods from the UAE would land in the country in the coming days.

Qatar Charity, a humanitarian and development non-governmental organisation, has delivered aid to flood-affected Afghan refugees and the underprivileged members of the host community in Balochistan, in collaboration with the Provincial Disaster Management Authority.

The aid has benefited more than 9,000 Afghan refugees and individuals from the host community.

Canada is also a donor to the United Nations Central Emergency Response Fund, which has allocated USD 3 million for flood response.

France Foreign Minister Catherine Colonna on Sunday offered condolences on the devastation caused by floods in Pakistan and offered assistance during a telephone call with her counterpart Bilawal Bhutto-Zardari.

According to a statement issued by the Foreign Office, Bilawal thanked her for “France’s expression of solidarity and offer of assistance to Pakistani people in this hour of need”.

The Pakistan government had been trying to reach out to the affected people by providing essential food items and shelters.

The annual monsoon, which began on June 14, is essential for irrigating crops and replenishing lakes and dams across the Indian subcontinent, but it can also bring destruction.

This year more than double than usual rainfall has been recorded, according to official estimates.