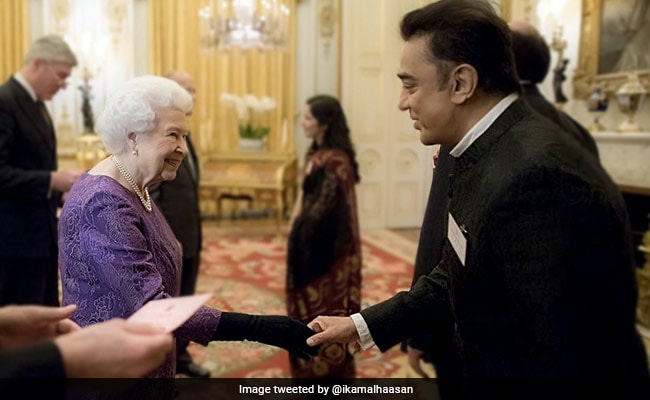 Veteran actor Kamal Haasan shared a throwback picture from his meeting with Queen Elizabeth, the longest-serving monarch in British history, who died at the age of 96 on Thursday. The picture happens to be from Kamal Haasan’s visit to the Buckingham Palace in 2017. The actor also met her back in 1997, during her India visit. Kamal Haasan, recalled in his tweet when she visited the sets of his unfinished film Marudhanayakam and added that “was probably the only film shoot she attended.”

Kamal Haasan shared a tweet in Tamil, which read: “I was saddened to hear the news of the death of Queen Elizabeth II of England. She was loved not only by the British but also by the whole world. 25 years ago, she accepted our invitation and attended the opening ceremony of Marudhanayakam. It was probably the only film shoot she attended.”

Recalling his meeting Queen Elizabeth, Kamal Haasan wrote: “Still vividly remember meeting her at the Palace 5 years ago at a cultural event in London. My deepest condolences to the people of England and the Royal Family for the loss of their beloved Queen.”

This is what Kamal Haasan posted:

On the work front, Kamal Haasan was seen in the smash hit Vikram, alongside Vijay Sethupathi and Fahadh Faasil. The film also had a cameo appearance by Suriya. He will next be seen in Indian 2, also starring Kajal Aggarwal, Siddharth, Rakul Preet Singh, Priya Bhavani Shankar, Bobby Simha, Guru Somasundaram and Samuthirakani.