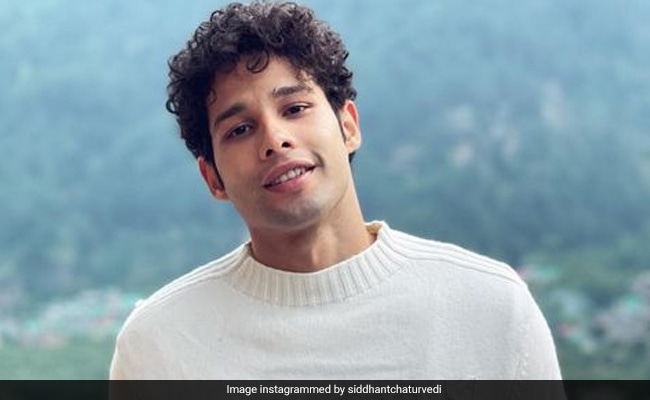 Siddhant Chaturvedi made his Koffee With Karan 7 debut recently, where he was accompanied by Phone Bhoot co-stars Katrina Kaif and Ishaan Khatter. Questions about the Gully Boy actor’s relationship status were obviously on the list and here’s how he responded when KJo asked Siddhant if he had any “love interest” or not. Siddhant replied, “Right now my work is the…” Without much ado, Ishaan Khatter added, “Ask him Ananda question.” A confused Karan Johar asked, “Ask Ananda question? What is Ananda?” Siddhant quickly drifted from the question and said, “No, no I am so single, that roaming around with me, he (Ishaan) has become single. I’m so single that the only reason I wanted to be invited for Katrina’s wedding was so that she could introduce me to one of her sisters.”

Ishaan Khatter’s comment may have been a cryptic hint that Siddhant Chaturvedi is dating Amitabh Bachchan’s granddaughter Navya Naveli Nanda. The rumours about Navya and Siddhant’s relationship began in April after they frequently started dropping comments on each other’s Instagram posts. Amid the rumours, the two were pictured arriving together at Karan Johar’s 50th birthday bash earlier this year.

Siddhant Chaturvedi stepped into the Indian entertainment industry with the 2016 web-series Inside Edge. He also featured in the web-series Life Sahi Hai. He became a star after playing the role of MC Sher in Zoya Akhtar’s Gully Boy, starring Ranveer Singh in the lead role. The actor also featured in Bunty Aur Babli 2, co-starring Saif Ali Khan, Rani Mukerji and Sharvari. He was last seen in Gehraiyaan with Deepika Padukone, Ananya Panday. His next project is Phone Bhoot with Katrina Kaif and Ishaan Khatter.

Navya Navelii Nanda, a graduate from New York’s Fordham University, is the co-owner of the Aara Health, an online platform which discusses health issues and more. She is the daughter of author Shweta Bachchan Nanda and entrepreneur Nikhil Nanda. She is the granddaughter of Bollywood stars Amitabh Bachchan and Jaya Bachchan. Her uncle Abhishek Bachchan and aunt Aishwarya Rai Bachchan are also celebrated actors.