Sri Lanka’s ousted President Gotabaya Rajapaksa, who returned home after seven weeks in exile following protests over economic hardships, could face legal action over forced disappearances of activists now that he has been stripped of constitutional immunity, a lawyer said on Saturday.

Rajapaksa flew to Colombo around Friday midnight from Thailand and was escorted under military guard to his new home in the capital.

He has no pending court cases because he was protected by constitutional immunity as president. A corruption case against him during his time as a top defense official was withdrawn soon after he was elected in 2019.

However, Rajapaksa will be served a summons next week to appear at the Supreme Court, where his immunity from testifying on the forced disappearance of two young political activists is challenged, said lawyer Nuwan Bopage, who represents the victims’ families. He said Rajapaksa fled the country when he was about to be served a summons in July. 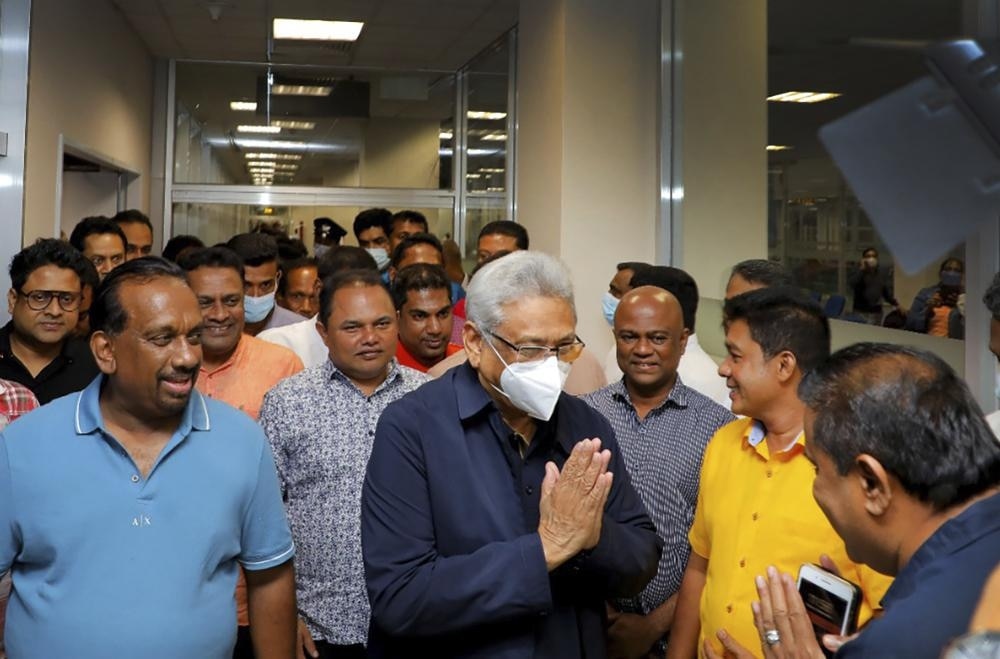 The disappearances took place 12 years ago soon after the end of the country’s long civil war when Rajapaksa was a powerful official at the Defense Ministry under the presidency of his older brother.

At the time, Rajapaksa was accused of overseeing abduction squads that whisked away rebel suspects, critical journalists and activists, many of them never to be seen again. He has previously denied any wrongdoing.

Rajapaksa escaped from his official residence when tens of thousands of people, angry over economic hardships when the country slipped into bankruptcy and faced unprecedented shortages of basic supplies, stormed the building on July 9. Days later, he, his wife and two bodyguards flew about a military plane to the Maldives. A day later, he went to Singapore, and later Thailand.

The foreign currency shortage has led the country to default on its foreign loans. Sri Lanka’s total foreign debt exceeds $ 51 billion of which $ 28 billion must be repaid by 2027.

The International Monetary Fund on Thursday agreed to provide Sri Lanka $ 2.9 billion over four years, subject to management approval that will come only if the island nation’s creditors give assurances on debt restructuring.

Economic difficulties led to monthslong street protests, which eventually led to the collapse of the once-powerful Rajapaksa family that had controlled the affairs of the country for the most part of the last two decades. Before Rajapaksa resigned after fleeing, his older brother stepped down as prime minister and three other close family members quit their Cabinet positions.

President Ranil Wickremesinghe, who took over from Rajapaksa, has since cracked down on protests and dismantled their main camp opposite the president’s office. President Ranil Wickremesinghe, who took over from Rajapaksa, has down on protests and dismantled their main camp opposite the president’s office. (File photo/Reuters)

Some protesters said they were not opposed to his return as long as he faces justice.

“Whether he is president or not, he is a citizen of Sri Lanka and he has the right to live in this country,” said Wijaya Nanda Chandradeva, a retired government employee who had voted for Rajapaksa and then participated in protests to oust him. He said Rajapaksa should be given necessary protection if there is a threat to his safety.

“I reject him because we elected him and he proved himself to be unsuitable,” said Chandradeva.

Bhavani Fonseka of the Center for Policy Alternatives, an independent think tank, said although Rajapaska is not going to be seen favorably, “the anger we saw in July has diminished. But there are still many questions about his role in the economic crisis and the call for accountability is still there.”