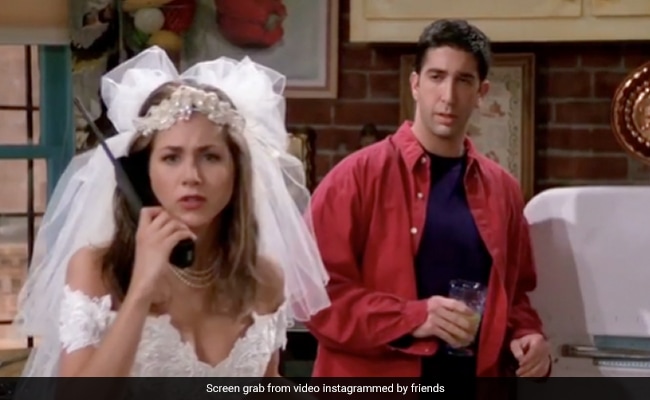 If you could just ‘pivot’ your attention a little (IYKYK), we would like to interest you in why F.R.I.E.N.D.S stars Jennifer Aniston (Rachel) and David Schwimmer aka Ross are trending once again. It all started when the actress simply shared a picture of herself with a product from her haircare brand and she simply wrote: “Something’s coming.” A few hours later, Jennifer Aniston’s F.R.I.E.N.D.S co-star David Schwimmer hilariously recreated the picture with the product. Tagging the actress, he wrote: “Jennifer Aniston – a towel I hope?” Replying to which she wrote: “Schwim? Trying to steal my thunder.” The Internet, of course, could not keep calm after this Instagram exchange. “You both are not on a break,” wrote a fan, quoting a dialogue which has divided fans for a few decades and how. “You guys! My heart,” added another one. “OH. MY. GOD,” (it’s ok if read in Janice’s voice) read another comment.

Most recurring of all, of course, were the lobster references. “Lobsters after all,” wrote a fan. “OMG, you are his lobster,” added another one. “See ? He’s her lobster,” added another. In the popular sitcom F.R.I.E.N.D.S, Pheobe Buffay always referred to Ross and Rachel as “lobsters.” According to her theory, the term is used to describe the person of whom another is meant to be with forever. In this case, Ross and Rachel. Ross had a crush on Rachel since college days and well, she did get off the plane for him many, many years later.

This is how David recreated the picture:

Jennifer Aniston and David Schwimmer trended big time last year as well, when the F.R.I.E.N.D.S Reunion aired and they confessed that they were crushing on each other, when they starred as friends/ lovers in the popular sitcom.