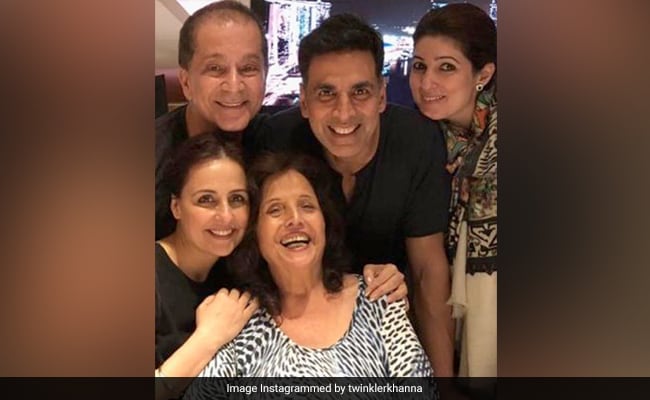 Actor-turned-writer Twinkle Khanna remembered her late mother-in-law Aruna Bhatia on her first death anniversary on 8 September. On Thursday, the former actor shared an old family photo on Instagram. In the picture, Twinkle Khanna can be seen posing with husband Akshay Kumar, late mother-in-law Aruna Bhatia, sister-in-law Alka Bhatia and Alka’s husband Surendra Hiranandani. Sharing the picture, Twinkle wrote, “My fabulous mother-in-law once told me there can’t be two tigresses in one field. She meant the two of us. She was right. There was only one real tigress. The rest of us paled in comparison. Her one-liners were as legendary as her generous heart” with a heart emoji. Many of Twinkle’s fans commented on her post. One of them wrote, “She will live forever in our hearts”, while the other wrote, “Love her that smile is everything.” Twinkle’s post also caught actor Bobby Deol’s attention, who dropped red heart emojis in her comments section.

On Akshay Kumar’s birthday last year, Twinkle Khanna reposted a picture that was originally posted by her husband on Instagram. It was a picture of Akshay’s mother Aruna Bhatia kissing him on his cheek. The post’s caption read, “Would have never liked it this way but am sure mom is singing Happy Birthday to me from right up there! Thanks to each one of you for your condolences and wishes alike. Life goes on.”

Akshay Kumar is celebrating his 55th birthday today. Twinkle Khanna and Akshay Kumar married in 2001. They are parents to two children – Aarav and Nitara.