A video of buildings being taken out by unprecedented rain in Pakistan is making the rounds on social media, with many users attributing the incident to climate crisis. The rain-induced floods have killed over 900 people across the country and left millions without shelter.

This video is shocking.
Watch the buildings getting taken out.

In the footage, buildings were seen being swept away by raging torrents of water as the flood situation remained alarming. Many buildings were swallowed by the flood waters, leaving behind a trail of dust. When the dust subsided, not even the base of the building remained.

The floods have wreaked havoc in Pakistan, ravaging the infrastructure of the country, with the NDMA reporting that more than 3,161 kilometres of road were damaged and 149 bridges swept away, while 6,82,139 houses were totally or partially damaged in the floods. 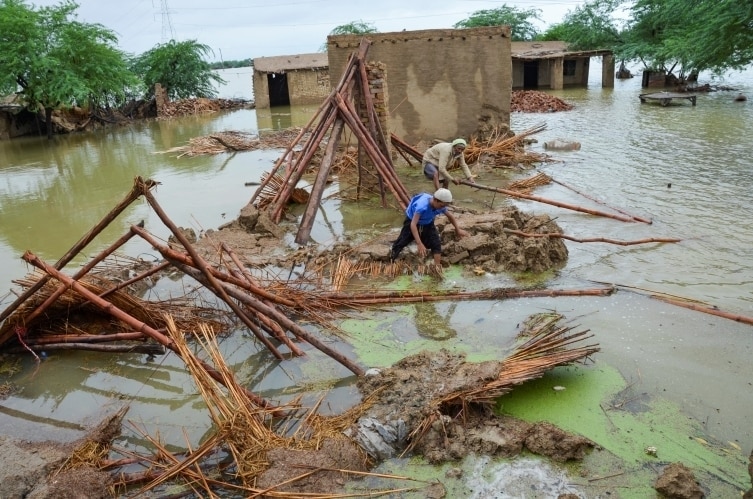 According to the NDMA, 682,139 houses have been totally or partially damaged in the floods. (Photo: Reuters)

Floods triggered by unprecedented monsoon rains have submerged more than half of the country, leaving more than 5.7 million without shelter and food in 110 districts.

Sindh and Balochistan provinces have been worst hit by the disaster. According to the NDMA, Pakistan received 166.8 mm of rain in August, as opposed to the average of 48 mm – an increase of 241%. Sindh and Balochistan witnessed a 784% and 496% increase in monsoon showers, respectively, the Dawn News reported.

The Pakistan Railway has suspended its operations at several places in the two provinces, while Pakistan International Airlines also halted on Friday its flights to Quetta, the capital of Balochistan province, due to bad weather.

Minister for climate change Sherry Rehman said on Thursday that a “war room” has been set up by Prime Minister Shehbaz Sharif at NDMA, which would spearhead relief operations across the country.