The engines roared to life at Starbase, SpaceX’s South Texas facility to mark another successful test. 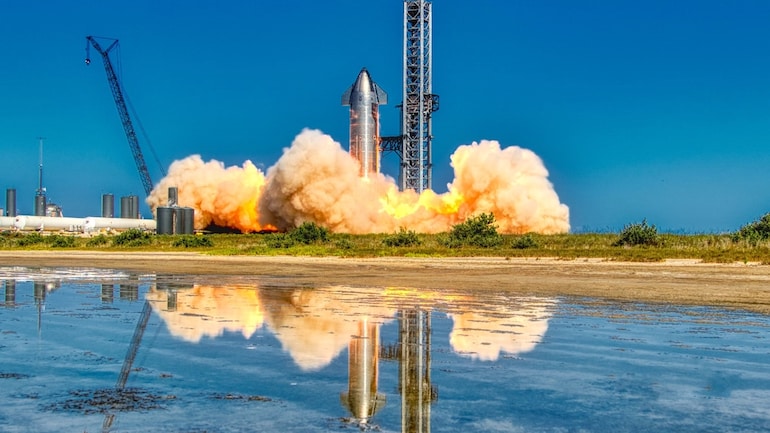 All six of the Raptor engines on SpaceX’s Ship 24 vehicle were fired. (Photo: Nasa Spaceflight)

SpaceX has successfully conducted the sixth static fire test on its ambitious Starship prototype as it preps for its maiden orbital launch later this year. The aerospace company fired up all the six Raptor engines setting off smoke and a fiery blaze in nearby areas that were controlled afterward.

The engines roared to life at Starbase, SpaceX’s South Texas facility to mark another successful test as it plans to lift off the massive machine on its maiden orbital flight. While the test lasted for barely a few seconds, the flames lasted longer and fire trucks had to be called in for safety precautions.

The engine had exploded during an earlier test in July during ground testing of the Super Heavy Booster 7 prototype. The booster, the towering first half of SpaceX’s next-generation Starship rocket system, was undergoing pre-launch tests on a stand on Monday when its engine section burst into flames, sending shock waves miles across the South Texas facility.

Also Read | Take 3: Nasa to re-attempt launching Artemis-1 to Moon, but it won’t be easy

SpaceX has launched early prototypes of Starship’s top half some nine kilometers above ground a handful of times in the past but never has the company launched the fully stacked, nearly 121.92 meters-tall rocket system to orbit, a significantly more challenging task.

The company has targeted the end of summer for the debut orbital flight, aiming to achieve a long-delayed pivotal milestone in the rocket’s development.

SpaceX’s complete Starship, which will stand 394 feet (120 meters) tall when mated with its super-heavy first-stage booster, is the company’s next-generation launch vehicle at the center of Musk’s ambitions to make human space travel more affordable and routine.