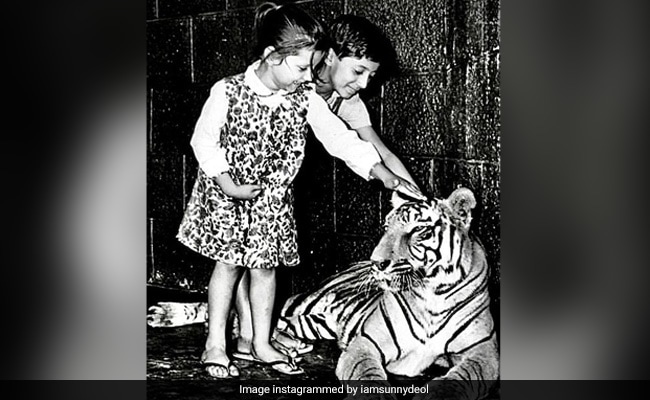 It had been quite a while since Sunny Deol shared priceless pictures from his family album. So, making the best use of Throwback Thursday, the actor treated his fans to a blast from the past on Instagram. Sunny Deol posted a photo of himself and his sister Lali from their childhood. They look super cute together on the sets of their dad Dharmendra’s 1968 film Ankhen. In the photo, Sunny Deol and his sister are seen touching a tiger that was required for a scene on the set. In the black and white photo, Lali is seen giggling as she touches the tiger. Sharing the throwback picture, Sunny Deol called his sister “fearless” and described his father’s movie as the “best spy film.” He wrote, “Fearless sister and brother on the sets of film Ankhen, my dad’s film. Best spy film. Watch it and tell me.” In the comments section of the post, fans expressed how much they loved the old photo, as well as Dharmendra’s 1968 film. “Love Ankhen only because of your dad,” wrote a user while another commented, “Sir, aap toh bachpan se hi Tiger ke sath khelate the (you have been playing with tigers since your childhood).”

Sunny Deol and Lali were born to Dharmendra and his first wife Prakash Kaur. A few years ago, the veteran actor shared a similar photo and called his kids “courageous” in the caption. But more on that later.

First, see the photo of Sunny Deol and his sister Lali from their childhood here:

The black and white photo was first shared by Dharmendra in 2018. He captioned it, “Courageous kids of courageous father touching the tiger and feeling so good at the set of film Ankhen. My daughter Lali and my son Sunny!”

Bobby Deol also picks old pictures from his family album to share on birthdays and anniversaries. Like this one, which the actor shared on Father’s Day. Here, the Deol brothers are seen posing with dad Dharmendra, mom Prakash Kaur and their siblings. “Papa, my love, my world, so blessed to be your son. Happy Papa’s day,” wrote Bobby Deol in the caption.